I am here today, at the request of my brothers Bernardo and Diogo, to write about something; whatever I want to, they gave me complete freedom. All that matters is that I write. It was in ancient times when I last picked up a pen and a piece of paper to write; now I have my laptop laying on my lap in front of me, though I must admit that it has been a long time since this situation has taken place. Actually when I think about it, the last time I wrote a text for my brothers was exactly a year ago, in Berlin freezing my ass off, even though I was within the warmth of my home. An entire year has passed since then. I have lived the four seasons of the year in Germany and have had two months of readaptation period here in Salamanca. ¿What conclusions have I drawn from this experience? This is what I am going to try to illustrate in this text, however I cannot promise anything, for I am not sure I have any conclusions to make.

The first couple of months were of reflection, intellectual and emotional solitude and muteness. There was a clear barrier that separated my world from the outside world, the socially interactive world. I was missing the key that liberated me from my world to the social one, idiom. My only instruments of interaction were body language and my capacity to read facial expression. My greatest weapon was my smile; in this point I must agree with Quentin Tarantino, personality goes a long way!

(I still have no clue as to the point of this text! Just goin´ with the flow!)

Although my German eventually became better, the cultural knowledge that I was able to grasp was limited. My capacity to understand the conversations around me was limited, I was not able to make a complete analysis of each situation, though I could most of the time deduce the main idea.

However restricted my ability to communicate was, I was able to understand the Berliners a little bit better, I was able to pick up on that energy specific to Berlin, that spirit that only Berlin possesses. In order to notice this spirit one must not speak perfect English. In the beginning I did not see anything special, I refused to see it, I was too introverted, living detached from Berlin. But once I decided to open my eyes I saw with clarity the beauty of this city, its uniqueness.

The concepts of freedom and organization here work together as I have never seen in other capitals. So much was permitted and so few people took advantage of the permissive situation. At this point I cannot help but think of Spain as the paradigm of the contrary (as the complete antagonist). The year I arrived in Salamanca was the year that an unprecedented law was passed, “ la ley anti-botellón” . This law banned the people from drinking in public, in the streets. At first I could not understand why, but when I contrasted this reality to that of Berlin, I was able to understand far better. Here, in Salamanca, when they drink in the streets there is no respect for anything, vandalism takes place, it's noisy and the scene afterwards is always of broken bottles, plastic bags and garbage cans tipped over. This is a typical “botellón”. So then I think, “no wonder they prohibited it!” In Berlin, however, I can drink a bottle of beer in the metro, in the streets, in a park, almost anywhere that I please (limited to common sense that is!); in fact, the majority of the Berliners make use of this liberty and without causing trouble.

The number of policemen was also an aspect that caught my attention. At first I did not notice it, but when I thought about it, I asked myself: “Where are all the policemen?!” Once again I must compare Berlin to Spain. In Salamanca I walk everyday to my university, approximately a 10-minute walk, and in that period I may see about 2 police cars drive by (sometimes more, sometimes less). Salamanca has 90,000 inhabitants. In Berlin it took me far more time and space to see a police car. Berlin's population is of 3,4 million people. I must say that there are exceptions, for example Labour Day in Berlin is full of policemen everywhere, but there is a historical reason for that, it is known that on this date a battle between anarchists and policemen take place!

The list of examples that demonstrate the uniqueness of Berlin is too long for this humble text. I could go on and on. In Tiergarten, for instance, I saw an interesting conversation between the park's gardener and a man. They were both standing while talking, what caught my attention was the fact that the man was completely naked! And they were having a normal conversation!! I tried to imagine this situation in Spain or Brazil, but it was just too comical to imagine. The way the Berliners were natural about their bodies fascinates me, even among friends the lack of puritanism may be easily observed.

As I said, I could go on, but won´t! There are just too many great things to say about Berlin! My suggestion is for anyone who is thinking about travelling, just go to Berlin; just one thing, I would advise you to go in summer time!
Postado por Bernardo Jurema às 10:15 AM Nenhum comentário: 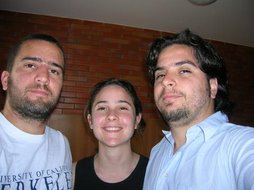